Some of Neil's Projects & Collaborations

Solo
​Neil has done many concerts as a solo artist.
Some of the places he has performed solo are in the UK, Germany, Switzerland, France, Indonesia, Croatia, Corsica.
Pat Metheny said of Neils solo version of Summertime -
"hard to imagine how you are doing all that! " 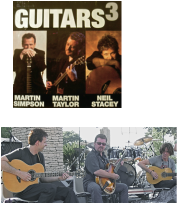 Guitars 3
​with Martin Taylor, Martin Simpson or Dominic Miller
The three guitarists joined together for several concerts in Europe and the UK.
With Martin Simpson came fantastic folk influences, singing and slide guitar.
With Dominic Miller the brilliant musicality, tone and deep musical understanding
The concerts always had a great amount of musicality, fun and improvising within structured arrangements
​and established tunes from Neil, Martin, Martin or Dominic.

Guitars 2
​with Martin Taylor
Together Neil & Martin played several concerts in Europe and the UK to great acclaim.

Dominic Miller & Neil Stacey Duo
​Dominic Miller
When Dominic is not playing with Sting he likes to spread his wings and play other music, as any great artist would.
Neil & Dominic played each others compositions, and recorded an album together - 'New Dawn'.

Dominic has his own group playing his compositions and it evolves over time with different musicians and formats..
Neil has become part of this conglomerate of musicians and has performed many times with Dominic's group, worldwide, in Europe and the UK.

Acoustic Mania
​with Antonio Forcione
Neil & Antonio performed together for around 10 years, playing worldwide, all over Europe, and of course in the UK.
Their music and performance was unrivalled and had a lot of spontaneity improvisation, melodic and fun.
They recorded two albums together, "Live At The Edinburgh Festival" and "Talking Hands".

Neil developed his original Django Reinhardt based to group to include piano and drums.
​He included his own gypsy style compositions and added more variation with more 'modern' style jazz tunes.
They recorded the album - "Another Day" together.

Neil Stacey's Kimbara Brothers
​with Chris Haigh, Frank Kilkelly & Bernard O'Neill
Based on the original Django Reinhardt line up - Violin, 2 guitars and bass this version of the Kimbara Brothers
played all over the UK and were very popular n the festival circuit.
They recorded two albums together -  "Now!" and "Time To Leave".

Influenced by Steps Ahead, Michael Brecker, Pat Metheny and much more this group toured Europe and the UK
​playing with great energy and musicality.